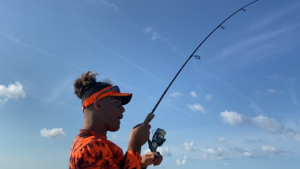 Red Drum action was good today on the second stop of the morning we were hooking red drums with double hook-ups. The morning started out checking the dredge hole here in Carolina Beach, N.C. for bait. We were looking manhaden but we’re not seeing any flips, I made a blind cast with the net, luckily had about 20 baits, threw the net several more times before I hit them again. I checked the live well in the Pathfinder it looked good enough for me, cleaned up the slime on the boat with a couple of buckets of water, tossed on the bow.

The temperature was about 75 degrees at 07:00 am pretty warm right, to begin with. Wind conditions were out of the North East at about 5 knots. Humidity was already climbing was going to be a hot day, which is normal for July here in the Cape Fear Region.

Ride down South on the Cape Fear River was really nice very little chop, had the Pathfinder running at 35 mph. the breeze felt really good, this new Yamaha 150 SHO was performing great. Tide was on the low end and falling so we crossed over the flats to Cape Creek.

Cape Creek is one of my go-to places to find the Red Drum crossing the shallow flats can be tricky most of the bars run straight out from the shoreline use caution until you learn the area. I eased the anchor over the side of the boat, watching the shoreline for bait, it looked good saw a couple of schools moving out with the tide.

The bite was on the first cast was a hook-up on a red drum, the other two anglers were still trying to bait up. We landed the red drum measured it at 19 1/2″ glad to see the action take off. As the other two anglers got their baits in the water we had double hook-ups, on red drum. The bite continued on catching a couple of flounders in the mix, we had to release the flounders NC regulations season is closed.