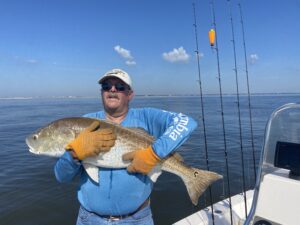 The Tar Heel State is famous for its trophy-sized red drum that weighs in excess of 40 pounds, traditionally caught in the surf and sound between Oregon Inlet and Cape Lookout. In 1984, a giant red drum was caught off Hatteras Island that weighed 94 pounds, 2 ounces; aside from being the state record red drum, this is also a world record for all tackle. North Carolina has produced 10 out of 16 current world records for red drum” Quote from NC Marine fisheries”
Red Drum also thrives in our inshore waters in the Cape Fear River, and its smaller creeks, and back bay areas just off the main river channel. These inshore fish can reach 30 lb. the class size which can be caught here in the Cape Fear area. Some of the hardest striking inshore fish are in the legal slot size which makes the Cape Fear River an angler’s destination if he is in search of Redfish action, the Cape Fear Guide – Capt. Mike Dennis specializes in live bait tactics to land these fish, it takes a little more work to catch the live bait, but the results speak, for themselves at the end of the day!

Trophy-sized Red Drum fishing NC can also be caught when fishing with Capt. Mike Dennis out of Carolina Beach, N.C. I have just recently discovered a spot where trophy-size Red Drums are being caught. I am not going to reveal this spot on this post you will have to book a trip with me and request that you want to target the over-the-slot Red Drums. These Red Drums are trophy size fish and will give you a real battle.

I fished this past weekend October 23, 2021, the Red Drum bite was just not what it should be in the creeks and backwaters. The full moon had just occurred, finger mullet had changed their pattern, was not able to catch live bait. I had to fall back to using shrimp for bait. I set up one rod with a double hook bottom rig with small hooks in order to catch croakers to use for cut bait. The croakers were biting well so, we had plenty of cut bait. For the fall of the year, the Red Drum bite should be exceptional, it just was not happening, in the backwaters. I moved to a spot that was close to the mouth of the Cape Fear River, this spot turned out to hold some big Red Drum, time had run almost run out for this charter when we finally got a hook-up with a big fish, I pulled the anchor quickly and started towards the fish it was running hard and fast. The fish suddenly stop running, I asked the angler was what was going on he said the fish had stopped running, the rod was still bent over. I could tell something was just not right when finally the angler began to real the fish up, it was a big Red Drum just the head with about 4 inches of the body left, a big shark had eaten the fish.