Inshore fishing Oak Island boating access was where my inshore charter began this morning picking up Clint Fontenot and his son Hunter. Both Clint and his son Hunter were experienced, fisherman they knew how to handle a spinning rod. This was their first time ever chartering a boat, they had mostly been surf fishing on their vacations to Oak Island. My plan for today was to try to give this father and son a chance to experience some Red Drum action in the backwaters of the Cape Fear River.

The first stop of the morning we headed to one of my favorites creeks just North of Bald Head Island, the tide had been rising for two hours, with a North East wind blowing close to ten knots. Fishing with Carolina Rigs baited with shrimp, the first cast was made to the shoreline where they were getting some little taps from croakers. I baited up a rod with shrimp made a cast to the deeper water in the creek and immediately hooked a croaker passed off the rod to Hunter to let him reel in the fish. I made several pieces of cut bait out of the croaker and   Clint and Hunter baited back up with fresh cut bait, made the cast, back to the bank. Within just a few minutes Hunter was hooked up with a Red Drum, the fish was giving him a real challenge on the light spinning rod, the Red Drum came to the surface of the water several times putting on a show. The Red Drum headed directly toward the boat and managed to get off as it went under the boat. Hunter was really excited and happy even though the fish got off right at the end of the fight. I felt like we were going to get some more red Drum action and encouraged them to keep on fishing! Several minutes passed with Clint and Hunter both catching croakers, putting the larger fish in the cooler, the smaller croakers I cut up for fresh bait. I think Hunter hooked up again with the next fish being a little too short and was released. 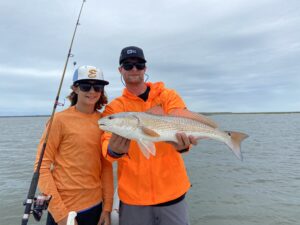 Inshore fishing Oak Island, Bald Head Island, or any other area in the backwaters of the Cape Fear region can be a challenge to find fish in the early spring. Clint and Hunter both landed Red Drum during their charter with the Cape Fear Guide out of Carolina Beach, N.C.