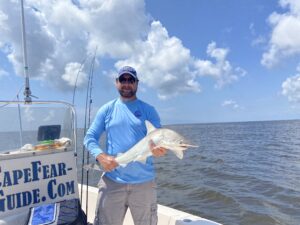 Bald Head Island guided inshore charter this morning was with Jim Heindlmeyer and his friend. Jim has been a regular client of mine for a few years fishing sometimes fishing with his family. This morning the tide was high we fished started fishing in Cape Creek hoping to land some flounders on one of my favorite banks. I anchored the Pathfinder Bay boat where we could cast just in reach of the bank. Fish just did not want to bite along this bank this morning, we fished about 30 minutes with no luck.

I moved out to the thoroughfare and worked several stretches of bank catching on a small red drum. Some days it can just be really tough to locate a decent bite. I crossed the Cape Fear River and headed to the AMD dock tried to fish there but the current was just too strong, moved on down to a couple of private piers with no success. Now things were just to slow, this is where past experience and knowledge of the local area comes into play. I headed to a spot along the inland waterway headed toward Oak Island where I caught red drum in years past. These rocks are in a pretty good current this morning the finger mullet were holding around them, sure enough, there were some fish ready to bite.

Jim and his friend had made a couple of cast with Carolina Rigs with finger mullet for bait, their baits were getting cut by what looked like a crab. I baited up a Carolina Rig with a small menhaden and made a cast as far as I could up off the bow. Within just a minute a red drum hit the bait, I passed the rod off to Jim he played the fish I grabbed the net and finally we boated a keeper, Red Drum. The action had changed we hooked a skate which gave a really good fight, but not what we were after. I believe Jim’s friend had a hit which turned out to be a small red drum that was released.

Our last stop of the morning was another rockpile where Jim had a real screamer on which turned out to be the Bonnet Shark. Jim’s friend also had a hard strike at the same time in which Jim had the shark on, so we had double hook-ups. I gaffed Jim’s shark got the shark in the boat safely, tried to give Jim’s friend pointers on how to play his fish in the strong current, I finally saw his fish it was a 20lb. black drum, I could see the fish clearly right on the surface, just before I could pull the anchor up to go to the black drum the leader wore thin and the fish broke off.

I always try to tell customers to be patient when things are slow, we will find some fish, most days I can always find some action, just like on this Bald Head Island Guide Inshore Charter all the action came on the last two spots!